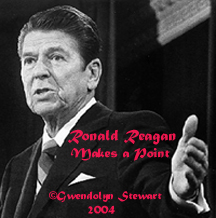 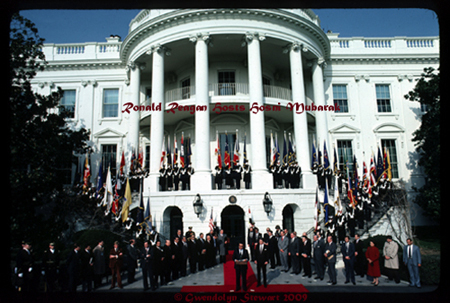 From RUSSIA REDUX by GWENDOLYN STEWART:

That summer of 1984 was the last year of Ronald Reagan's first term, a time of a Cold War newly heated up,
before Nancy Reagan helped convince him that peace made a more useful historical legacy.

It was the summer of the Los Angeles Olympics and the Soviet tit-for-tat retaliatory boycott of those Olympics
(we had devastated the Soviets by boycotting their 1980 Moscow Olympics after the invasion of Afghanistan).

It was the summer of Ronald Reagan's 'joke' in the warm-up to a Saturday radio address,
a 'joke' declaring 'Russia' an outlaw nation and announcing that the bombs would fly in five minutes.

Ah, well, it was explained, he did not know the microphone was on.

Ronald Reagan had begun his career, half a century before, as a radio announcer.

More on politics in PICTURE POLITICS

IN THE WORKS: A book based on the Harvard exhibit of a quarter-century of the photography of Gwendolyn Stewart entitled "HERE BE GIANTS."

GWENDOLYN STEWART is both a photojournalist and a political scientist specializing in political leadership in Russia, China, and the U.S.   A former Bunting/Radcliffe Fellow, she is an Associate (and former Post-Doctoral Fellow) of the Davis Center for Russian Studies and Central Eurasian Studies at Harvard, as well as an Associate in Research of the Harvard Fairbank Center for Chinese Studies.   For the Fairbank Center she co-founded and co-chairs the China Current Events Workshop, a forum for examining pressing issues in Greater China.   Her Harvard Ph.D. dissertation (Sic Transit) dealt with the role of the leaders of the republics, especially Boris Yeltsin, in the breakup of the Soviet Union.   She is currently writing RUSSIA REDUX, the story of Russia under Yeltsin and Putin, part political analysis, part travel-memoir.   Imagine wandering over the largest country on earth, not in the train of a railroad, but in the train of one of the most powerful and contradictory men on earth.   Or all by yourself.

THE PHOENIX    THE POWER HUG