Most quoted saying: "ALL POLITICS IS LOCAL."

"He who don't toot his own horn, 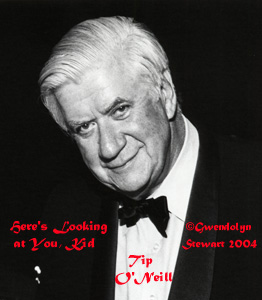 Don't get his own horn tooted." 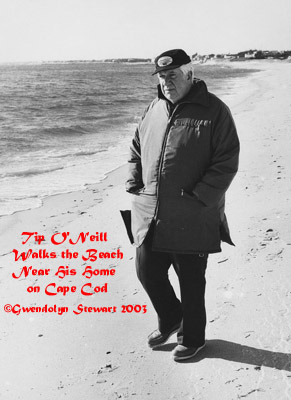 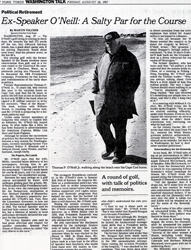 Thomas P. O'Neill, Jr., known as "Tip" to nearly everyone (but not to his wife, Millie, to whom he was "Tom"), was very much a man of North Cambridge, born and bred.   He famously never forgot where he came from.   But he also came to love Cape Cod.   His work on behalf of the Cape Cod National Seashore was one of his proudest achievements.

Featuring Seven Photographs of Speaker O'Neill By Gwendolyn Stewart, including: 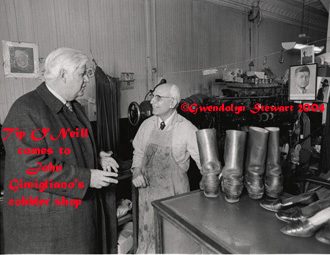 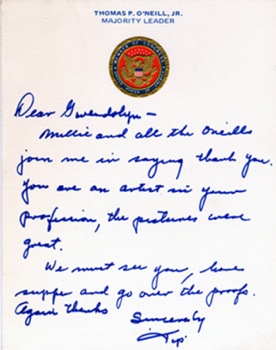 More about politics in PICTURE POLITICS

TIP O'NEILL FEEDS THE BIRDS NEAR HIS HOME ON CAPE COD

TIP O'NEILL STROLLS THE CAPE NEAR HIS HOME

Other Work by Gwendolyn Stewart:

TIP O'NEILL REFLECTS ON THE ELECTION OF JOHN F. KENNEDY

BORIS YELTSIN: Another Big Politician Who Knew That All Politics Is Local

An exhibition of a quarter-century of the photography of Gwendolyn Stewart
entitled "HERE BE GIANTS" was held at Harvard.
Coming:   HERE BE GIANTS the book.

GWENDOLYN STEWART is both a photojournalist and a political scientist specializing in political leadership in Russia, China, and the U.S.   A former Bunting/Radcliffe Fellow, she is an Associate (and former Post-Doctoral Fellow) of the Davis Center for Russian and Eurasian Studies at Harvard, as well as an Associate in Research of the Harvard Fairbank Center for Chinese Studies.   For the Fairbank Center she co-founded and co-chairs the China Current Events Workshop, a forum for examining pressing issues in Greater China.   Her Harvard Ph.D. dissertation (Sic Transit) dealt with the role of the leaders of the republics, especially Boris Yeltsin, in the breakup of the Soviet Union.   She is currently writing RUSSIA REDUX, the story of Russia under Yeltsin and Putin: part political analysis, part travel-memoir.   Imagine wandering over the largest country on earth, not in the train of a railroad, but in the train of one of the most powerful and contradictory men on earth.   Or all by yourself.