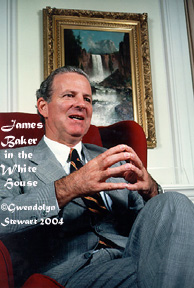 JAMES ADDISON BAKER, III, attorney, friend and friendly competitor to George Herbert Walker Bush.   Chief of staff and then Secretary of the Treasury to Ronald Reagan; Secretary of State to the first president Bush; major player in securing the election of the second when it went to the Supreme Court.   Photographed by GWENDOLYN STEWART in the Reagan White House (c. 2014)

In September 1989, the U.S. Secretary of State, James A. Baker, III, had hosted the Soviet Foreign Minister, Eduard Shevardnadze, at his home in Jackson Hole, Wyoming, in the gorgeous natural setting of the Grand Tetons. Now, from the whole wide canvass of the USSR, Shevardnadze had chosen Lake Baikal, this gem of Siberia, and not something from the mountains of his native Georgia (famous for its mountains) to "pay back" Baker for his hospitality. Their "informal" meeting featured hydrofoiling over Baikal itself, and fishing on the Angara River, the only river to flow out of the lake. (Three hundred thirty-some rivers and streams flow in.)

On my first trip to the Soviet Union in 1984, I had been confined to the very limited region at the toe of Baikal, because, as I was informed, I was "not from a socialist country."

The changes under Mikhail Gorbachev meant that on August 2, 1990, a few other journalists and I could board a special hydrofoil with Shevardnadze and Baker, who was definitely also "not from a socialist country." Baker the smooth, Baker the clever, Baker the very un-socialist Houston attorney:   I had photographed him in his office when he was Ronald Reagan's chief of staff. I had photographed him at IMF-World Bank meetings in his next capacity as Secretary of the Treasury. I had photographed him reading carefully from his briefing book at his Secretary of State confirmation hearings, as the Senators quizzed him about countries he was having to quickly get up to speed on.

Now I was capturing him cozily comfortable with his Soviet counterpart in the front of the cabin, as their hydrofoil whipped over the lake. In my wide angle lens, their pleasure in the scene was patently evident.   One -- KGB? -- official in the body of the hydrofoil did demand to know who my "godfather" back in Moscow was, but he seemed satisfied by my answer. The atmosphere of the entire ministerial "summit" was good-natured and rather casual. For Baker and Shevardnadze, it was their sixteenth meeting in eighteen months.

Arms control was the official focus of their working sessions in the nearby half-million strong city of Irkutsk, with Afghanistan and Cambodia also prominent on the agenda. There was bargaining over the Soviet desire for another Bush-Gorbachev summit that year. The get-together broke up on its second day, August 2, 1990, with a morning press conference featuring the two foreign ministers standing above us on a veranda in Irkutsk, and with the sudden, startling news just afterwards that Saddam Hussein had invaded Kuwait. The Iraqi ruler's move put paid to all the questions the reporters had been so focused on a moment before. Now it was: How would Moscow respond to U.S. military action against its Iraqi ally? Baker dutifully made his scheduled way a few hundred miles to the capital city of Ulan Bator on an abbreviated mission to Mongolia, yet another "emerging democracy," then flew back to Moscow to nail down a joint statement with Shevardnadze. They met at the Moscow airport August 3 to visually and viscerally fix into people's minds the jointness of their actions.

James Baker has gone so far as to pronounce August 2, 1990, "The Day the Cold War Ended," and to assert that "the world as I had known it for my entire adult life would no longer exist." Since he was one of the principals, he may be forgiven for thinking that the real end of the Cold War came on his watch. Even Bush's National Security Adviser, Brent Scowcroft, who was not there, and not un-competitive, also acknowledges its significance. The Baker-Shevardnadze joint declaration condemning the invasion, he writes, "dramatically put the two superpowers on the same side of a major crisis for the first time since the Cold War began." The prospective payoff was the possibility of UN resolutions against Iraq, free of the risk of Soviet vetoes.

In practical terms, what the Americans were asking was an end to Soviet arms shipments to Iraq and the denunciation of one of Moscow's most important Middle East allies -- not neutrality, but an active betrayal. Baker crows that he was able "to leverage Shevardnadze's Georgian passion to the maximum advantage." This "passionate" Georgian, it must be remembered, had been the head of the KGB back in his native republic. Mikhail Gorbachev had to sign off on the deal, and he did eventually make his own public denunciation of the invasion, but it became clear that he was quite willing to let Shevardnadze make the running, way out in front on the issue. By one means or another, the Americans got what they wanted.

More on politics in PICTURE POLITICS

IN THE WORKS: A book based on the Harvard exhibit of a quarter-century
of the photography of Gwendolyn Stewart entitled "HERE BE GIANTS."