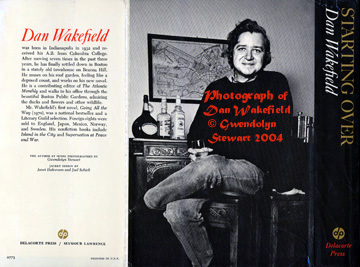 DAN WAKEFIELD's writing has ranged widely, from journalism to fiction and screenwriting to spiritual explorations.

His novel STARTING OVER (back cover above) was made into a movie directed by Alan J. Pakula, starring Burt Reynolds, Jill Clayburgh, Candice Bergen, and Charles Durning (both Clayburgh and Bergen were nominated for Academy Awards for their roles).

Dan has an appreciation of his friend KURT VONNEGUT here.

An exhibition of a quarter-century of the photography of Gwendolyn Stewart entitled "HERE BE GIANTS" was held at Harvard.   Coming:   HERE BE GIANTS the book.


GWENDOLYN STEWART is both a photojournalist and a political scientist specializing in political leadership in Russia, China, and the U.S.   A former Bunting/Radcliffe Fellow, she is an Associate (and former Post-Doctoral Fellow) of the Davis Center for Russian Studies and Central Eurasian Studies at Harvard, as well as an Associate in Research of the Harvard Fairbank Center for Chinese Studies.   For the Fairbank Center she co-founded and co-chairs the China Current Events Workshop, a forum for examining pressing issues in Greater China.   Her Harvard Ph.D. dissertation (Sic Transit) dealt with the role of the leaders of the republics, especially Boris Yeltsin, in the breakup of the Soviet Union.   She is currently writing RUSSIA REDUX, the story of Russia under Yeltsin and Putin, part political analysis, part travel-memoir.   Imagine wandering over the largest country on earth, not in the train of a railroad, but in the train of one of the most powerful and contradictory men on earth.   Or all by yourself.