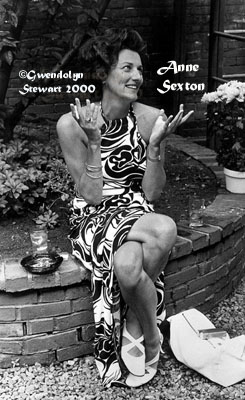 This photograph to me captures Anne's duality, and argues against reducing her to her death.

Cover the top part of the picture; look at the legs tortuously twisted together.   It is well known that she made a number of attempts to kill herself.   Now cover the bottom half of the photograph, and look at the arms and radiant face.   She told me she always felt joyous when she was rescued from those attempts.  There was of course no final rescue, but I am not convinced that she "really" meant this suicide attempt, that she would not have welcomed another rescue. -- Gwendolyn Stewart

POSTER AVAILABLE:   Please contact: GWENDOLYN STEWART
The poster is 18x24", with a white border around the full-length image of the photograph as shown, but without the labels.

ABOUT ANNE & THE PHOTOGRAPH

"The high point of the winter for Sexton was the reading arranged for her at Sanders Theater on 7 March [1974] by the Harvard Literary Club. Since this reading was to serve as the Boston debut of The Death Notebooks, she was ambitious for a big turnout. When she saw the mimeographed flyer -- with a typo in the book title -- produced by the Literary Club, she went into high gear. Bob Clawson now owned an advertising agency, so she hired him to produce a poster, using the photograph by Gwendolyn Stewart she had wanted Houghton Mifflin to print on the dustjacket of The Death Notebooks. This was inserted into both the Harvard Crimson and the Boston Phoenix as a flyer, and was also distributed around greater Boston by a flying wedge of friends.  ...

"Sexton paced slowly to the stage with Dan Wakefield. While he made a warm introduction, she stood leaning against the wall behind him, stunning in a black jersey top that wrapped her body and a long black-and-white skirt slit to the knee.  (The poster did its work so well that later, people who had been in the audience thought she had been wearing the dress in the photograph, which one person remembered as red.)"   --   from ANNE SEXTON, by Diane Wood Middlebrook.

"Another of her [Anne Sexton's] reading outfits is on display in a famous photo by Gwendolyn Stewart that was on the cover of Diane Wood Middlebrook's controversial 1991 biography of Sexton....   [T]he image on the front is so glorious and alive, it reveals a lust for life that makes it perfectly understandable why the book's terrible revelations of character deficiencies ... are delivered in a tone that is sad and loving and forgiving....   The photo is all charisma and charm, the poet is shown twisted into place, her legs tightly crossed, her feet in white shoes with a crisscross buckle, her sleek black-and-white dress aswirl in Matisse-style geometry, bangles spangled down her arms, her hands lively and expressive, as if arguing a point or responding with glee to some juicy gossip, a Salem menthol draped between her fingers."   --   from BITCH, by Elizabeth Wurtzel.

Anne had chosen this picture to be the author's photograph on THE DEATH NOTEBOOKS, and I was happily anticipating its appearance there.

It turned out,however, that the book's editor strongly disliked the picture. It was, he said, "too revealing." He pressed Anne to change her mind. Weakened after a suicide attempt, she capitulated. The photograph was pulled.

Linda Gray Sexton did use it later in ANNE SEXTON: A Self-Portrait in Letters, and Peter Davison found it there. Himself a poet and someone who had known Anne, he liked the photograph precisely because it was revealing. It was he who edited Diane Middlebrook's book and chose Anne's favorite for the cover of ANNE SEXTON: A Biography.   -- Gwendolyn Stewart     (And yes, those are Anne's eyes you are seeing in the background of this web page.)

A new-old, previously unpublished photograph of Anne can be found here.

A new edition of ANNE SEXTON: A SELF-PORTRAIT IN LETTERS

with a previously unpublished photograph by GWENDOLYN STEWART on the cover.

Other Work by GWENDOLYN STEWART:

GWENDOLYN STEWART is both a photojournalist and a political scientist specializing in political leadership in Russia, China, and the U.S.   A former Bunting/Radcliffe Fellow, she is an Associate (and former Post-Doctoral Fellow) of the Davis Center for Russian Studies and Central Eurasian Studies at Harvard, as well as an Associate in Research of the Harvard Fairbank Center for Chinese Studies.   For the Fairbank Center she co-founded and co-chairs the China Current Events Workshop, a forum for examining pressing issues in Greater China.   Her Harvard Ph.D. dissertation (Sic Transit) dealt with the role of the leaders of the republics, especially Boris Yeltsin, in the breakup of the Soviet Union.   She is currently writing RUSSIA REDUX, the story of Russia under Yeltsin and Putin: part political analysis, part travel-memoir.   Imagine wandering over the largest country on earth, not in the train of a railroad, but in the train of one of the most powerful and contradictory men on earth.   Or all by yourself.