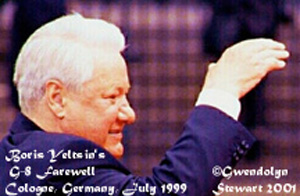 When Boris Yeltsin last invited readers to share his thoughts on his life and Russia's times, it was 1994. The Russian leader had just ''solved'' a constitutional crisis by sending tanks to rout Kremlin pretenders from their stronghold in the Moscow White House - after they had fired the first shots, of course.

''The Struggle for Russia,'' the second volume of what has now become a Yeltsin trilogy, was his apologia for using force, issued just as he was about to use force even more egregiously in Chechnya. His earlier memoir, ''Against the Grain'' (1990), had been a campaign biography, Yeltsin's self-introduction to Russia and the world.

Now, in the wake of his stunning millennial New Year's Eve resignation, comes the ''Midnight Diaries,'' the summing up of his decade of power.

From the first to the last, these memoirs have featured breathtaking candor, and giant gaps. This third volume is no exception. He and his perennial collaborator-ghostwriter, Valentin Yumashev, know what the controversial issues are, and address them head on: the family (daughter Tatyana, yes, eminence grise Boris Berezovsky, no, though crucial meetings seem to take place in his offices); the oligarchs (necessary for the transitional phase); corruption (none on his part!); his health (many new details, not everything); his drinking (to relieve stress). He did, he admits, contemplate canceling the 1996 presidential elections ''for two years.''

But the main theme of the book is Yeltsin's search for a successor to take Russia out of the new Time of Troubles into which it had fallen, ''the crisis era between two stable periods.'' So many crises! Yeltsin has a long list of them, but, he argues, they were not his fault. Society was divided, the president's legitimacy constantly challenged. There were three serious attempts at impeachment in the decade, plus the shadow of the threat of removal on medical grounds hanging over his entire second term.

If ever there were a Faustian political bargain, Yeltsin's election victory in 1996 would seem to be it. He ran in the face of single-digit approval ratings, war in Chechnya, two heart attacks in 1995, and a communist victory in the December 1995 parliamentary elections. The communists, and much of the outside world, assumed that their leader, Gennady Zyuganov, was going to win the presidency in June 1996. With all the hype afterward about the role of money and the media in that race, none of it would have mattered without Yeltsin's own apparent return to vigor in a tough campaign. What it cost him was his own longer-term health. In ''Midnight Diaries,'' he actually names the date of the heart attack that finally brought him down: June 26, one week before the deciding round of the election. What it cost Russia, we will see.

It took Yeltsin eight months of his second term to mend enough to fully command the Kremlin again. Typically, he chose to try to speed up economic changes, this time with the aid of the ''young reformers,'' Anatoly Chubais and Boris Nemtsov. He also began in earnest his search for a successor. Just as Viktor Chernomyrdin fancied himself growing nicely presidential, Yeltsin dumped him. Five-plus years of one prime minister were followed by four in 17 months, including Yevgeny Primakov and Vladimir Putin.

But Yeltsin's position was weakened by his further illnesses, a Russian economic default and devaluation, and the scandals that seemed to be drawing nearer to his own family, tempting other ''political heavyweights'' to jump in. The most formidable challenge came from Mayor Yury Luzhkov, his former ally, using his Moscow base as Yeltsin had once tried to use it against Mikhail Gorbachev. Luzhkov hitched his star to Primakov's and gathered support from the powerful regional governors. Luzhkov, far more than Zyuganov the communist, is the subject of Yeltsin's ire, even though ''Communist'' is his label of choice to discredit his opponents.

In the end, Yeltsin is persuaded that he has found in Putin the young, energetic, intellectual, democratic successor with a ''steel backbone'' that he had been seeking, and found him himself. Whatever the importunings and strategizing of oligarchs and favorites who might have tried to influence his choice, this is the same Yeltsin who always loved the ''triuk,'' the trick, the sharp unexpected move that catches one's opponent off balance. Yeltsin explicitly acknowledges his decision to sacrifice half a year of his own term to shorten the campaign by 10 weeks. Putin, Yeltsin reveals, did not like public politics and election campaigns. In this, the former KGB colonel was, at least initially, very unlike Yeltsin, the former provincial politician. Yeltsin used to mix right in with crowds and even sparked off their challenging questions.

Yeltsin also meditates on Russia's role in the world since the end of the Soviet megastate. That this breakup was relatively bloodless is very much to his credit, part strategy, part inheritance from the liberationist theology of Andrei Sakharov and other liberal deputies in the first Soviet Congress of People's Deputies with whom he served. Before Yeltsin ever stood on a tank in front of the Moscow White House, he had flown to stand with the Balts when they were under attack from Gorbachev's tanks.

His initial economic plan was also a liberal one as understood by the Washington consensus of the day. The first post-Soviet Russian government, led by Yegor Gaidar, tried to break the hold of the military-industrial-complex on the economy. The withdrawal of Soviet-era troops from Central Europe was completed. NATO responded by enlarging to Russia's borders. As a reward - or a bribe? - for acquiescing, Russia was made a ''full'' member of what became the G-8.

Then NATO in its first hot war bombed Yugoslavia: ''Wasn't it obvious to them that each missile strike against Yugoslavia was an indirect strike against Russia?'' Yeltsin asks. Moscow helped arrange a settlement, and then vented its frustrations by deploying its paratroopers to the Pristina airport first. Tough rhetoric was followed by the dramatic return to rapprochement at the G-8 summit in Cologne. These developments are part of the legacy that Yeltsin left for Putin. But Russia had never been more open to partnership with the United States and the West than it was when Yeltsin began. George Bush could not bring himself to respond in kind.

Will the first Russian president's vision of his own time as the tumultuous interlude between two stable periods be proven correct? And with what kind of stability? Laissez-faire, run riot, often seemed the rule after the overthrow of the hypercentralized Soviet Union. Corrections were due and overdue. But for all its woes, Russia under Yeltsin did change in positive directions, with significant segments of the population now accustoming itself to the new society. Stay tuned.

Gwendolyn Stewart, an associate at Harvard's Davis Center for Russian Studies, is writing her own account of the Yeltsin and Putin years.

GWENDOLYN STEWART is both a photojournalist and a political scientist specializing in political leadership in Russia, China, and the U.S.   A former Bunting/Radcliffe Fellow, she is an Associate (and former Post-Doctoral Fellow) of the Davis Center for Russian Studies and Central Eurasian Studies at Harvard, as well as an Associate in Research of the Harvard Fairbank Center for Chinese Studies.   For the Fairbank Center she co-founded and co-chairs the China Current Events Workshop, a forum for examining pressing issues in Greater China.   Her Harvard Ph.D. dissertation (Sic Transit) dealt with the role of the leaders of the republics, especially Boris Yeltsin, in the breakup of the Soviet Union.   She is currently writing RUSSIA REDUX, the story of Russia under Yeltsin and Putin, part political analysis, part travel-memoir:   Imagine wandering over the largest country on earth, not in the train of a railroad, but in the train of one of the most powerful and contradictory men on earth.   Or all by yourself.

An exhibition of a quarter-century of the photography of Gwendolyn Stewart entitled "HERE BE GIANTS"was held at Harvard.
Coming:   HERE BE GIANTS the book.

MORE ABOUT THE AUTHOR: